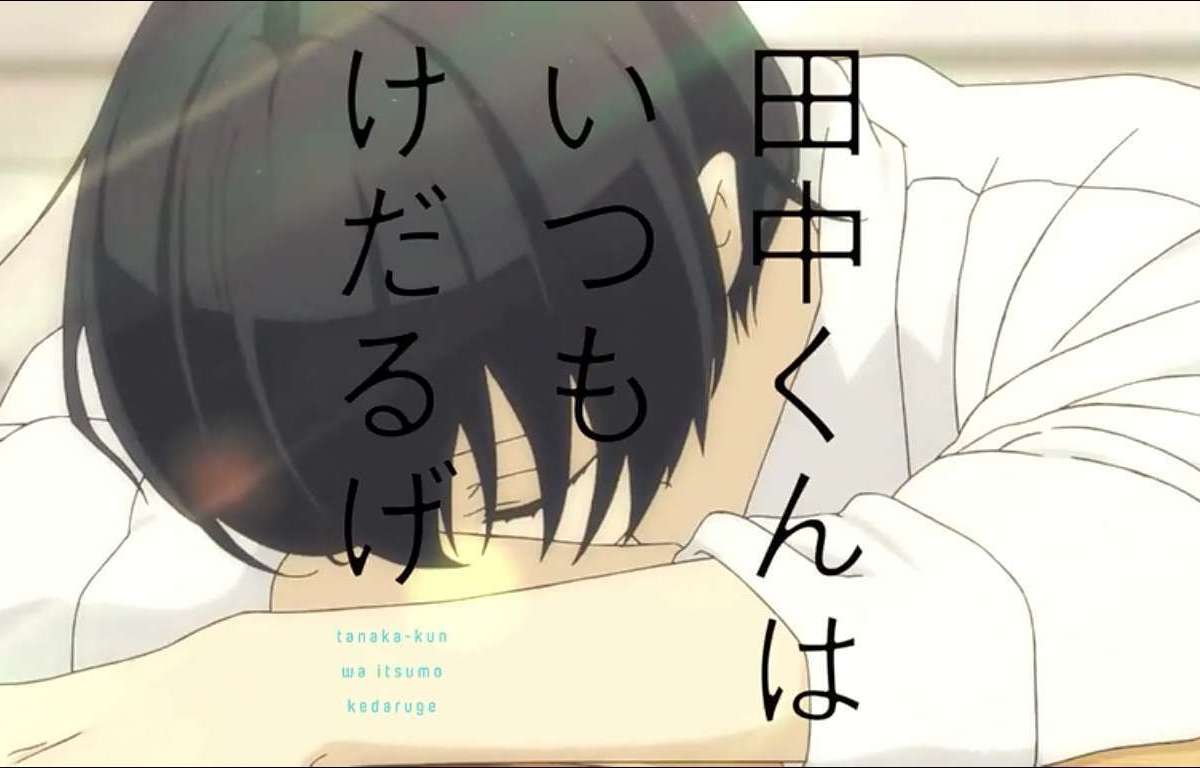 I feel this is one of those anime titles that just doesn’t sound right in English, mainly because they picked a relatively-obscure word that isn’t used as much in everyday conversation. Perhaps that’s my experience though; maybe elsewhere in the English-speaking world, “listless” is used all of the time. I can’t say I’ve never heard of this word, although it’s usually the adverbial form “listlessly”. Regardless, we’re here to actually talk about the show itself, not its title!

Our main character is a relatively skinny and unassuming high school guy named Tanaka-kun. He generally means well – he’s not really malicious or anything of the sort – but he tends to prioritize his own laziness and care-free nature over pretty much everything else. He sleeps in class, he slowly moves from place to place, he gets just the least amount of work done to get by, and just lazes around for everything else. Honestly, one could question how he’d ever be able to get through life.

The answer to such a hypothetical question: Ohta-kun. Big, tall, and blonde, he’s Tanaka-kun’s classmate and best friend, doing his best to make sure Tanaka-kun is doing alright (or at the very least, staying out of trouble). While you may think Ohta could be menacing and scary looking, he’s more of a big, soft, kind bear. He goes way out of his way to help everyone he can, even if it puts himself in danger. The sight of Ohta carrying Tanaka from class to class is a common thing in this high school.

Along with that, we have a few female friends thrown in the mix too. Miyano is a short, super-energetic classmate of Tanaka’s, and puts 110% effort into everything she does… something that doesn’t exactly work when she decides to become Tanaka’s apprentice to learn how to be lazy. Echizen is Miyano’s best friend (and Ohta’s neighbor) with a hard, delinquent-type outside, but a soft, chewy inside. Finally, there’s Shiraishi, the well-adored, popular class president, but with a big secret.

Altogether, we get to see these five friends as they go about their lives, and their laziness, in the slice-of-life adventure that is high school…

I’m a relatively big fan of a show with a relaxed pace. I prefer going through a relaxed pace in my life itself, so it’s cool to see a show that doesn’t need to be throwing stuff at you every second to still be enjoyable. One of the more infamous slow-paced shows of late is Glasslip, which I really enjoyed… when the supernatural stuff wasn’t mucking up the plot.

Tanaka-kun has no supernatural abilities or anything though. This show is pretty squarely in the slice-of-life genre, mainly featuring Tanaka, Ohta, and one or two other characters dealing with one situation or another… usually these “situations” are pretty easily taken care of if you were a normal person, but Tanaka is lazy – very much so.

I really liked this show. Even when I wasn’t enjoying many other shows of the Spring 2016 season, this one was one I usually got happiness out of, if not a laugh or two per episode as well. I wasn’t rolling on the floor laughing, though, as this show is more about the light humor. Tanaka-kun didn’t really have a bad episode. It had episodes that I certainly enjoyed more than others, and that were funnier or had better story ideas, especially the first few episodes, but I still enjoyed nearly every moment of this show.

Tanaka-kun wasn’t afraid to have moments of downtime and to take pauses, to reinforce that feeling of relaxation and laziness throughout the entire series. It worked pretty well for the comedic timing of this series too. I especially appreciated the start of each episode, as they focused on a single small gag or joke, before the show’s title appeared and the theme music got going; some of those were really funny. For me, that opening gag set up how good that episode was going to be.

Tanaka’s thought process and the way he views the world differs so much from many of us simply due to his listless nature, and it generally tends to be a good source of comedy. That being said, I do feel perhaps there were some small “gimmicks” (in lack of a better term) that Tanaka did later on in the show – purportedly, to further his laziness – that I didn’t think were really necessary, but I guess you can only go so far without needing to throw in something fresh.

Ohta also tends to be a source of great amusement throughout the anime, mainly because of his personality, and the way that he interacts with Tanaka. Without a doubt, these two are my most favorite characters in the series (which is a good thing to say as they’re the ones we see the most).

However, the other characters, while still enjoyable, are not on the same level. Miyano is actually also pretty fun to see – almost on the same level as Ohta for me – but after the first few episodes, she begins to appear less and less. Shiraishi doesn’t get quite enough development for me to really get too much enjoyment out of her, although I still liked her. The blue-haired and red-haired guy friends of Ohta’s barely make an appearance in this series, which disappoints me, because I would’ve liked to see more of them. I don’t even remember their names!

The two characters I liked the least, though, were Echizen and Tanaka’s sister. In both their cases, they mainly remain archetypal, even though I feel Tanaka-kun would be a good show to play these types a bit more ironically. Echizen has a few interesting moments to her, and in the beginning, the series even shows Miyano confessing her feelings to Echizen. However, after this, Echizen goes on to mainly play a tsundere, towards both Ohta and Tanaka; it really disappoints me as I would’ve liked to see Echizen and Miyano actually continue together as a canon relationship. Tanaka’s sister is the jealous sibling, wanting Tanaka’s affections all for herself. I’m not really disgusted by her, but more bored; there’s nothing about her that I really find interesting, and I wish there was.

Despite all that though, I did have a lot of fun with this show, like I’ve said multiple times. Even if I didn’t enjoy Echizen or Tanaka’s sister all that much, I still enjoyed every single one of these characters here, and their personalities shone through their actions. The slow pacing and light humor of this show made it one of my more favorites in recent time.

The characters in this series are relatively simply-designed, compared to what I feel we generally see in anime of recent. It works pretty well for the series, and even with their designs, Tanaka-kun makes sure each of its characters’ designs are memorable. There’s a recurring character that first appears in episode 9, and when she returns in a later episode, I was able to recognize her with relative ease, despite her wearing a very different outfit.

The animation for the series is also surprisingly pretty good too. There’s not really much need for fast, fluid motion here, as this show primarily keeps a pretty slow pace, but the few moments where it’s a bit more action-y, I don’t feel disappointed. The standard of quality would definitely be higher if this were a combat-heavy, action show, but for a slice-of-life, it is definitely above the bar.

The thing I really want to talk about, though, is the background designs. The high school that these characters spend so much of their time in is freaking beautiful. I’d pause the episodes during wide shots, just so I could look at the designs of the high school’s interior. High-school-me would be so jealous if he had seen this high school back at that time. Throughout the entire series, the backgrounds tend to be these soft, light colors, which are not uncommon in a slice-of-life. Where I wouldn’t generally comment on the color and texture scheme used in a slice-of-life show, something done here makes it feel just a bit different, and fits well for this series, I think. None of the colors are super bright or in your face. There is a dip in quality after the first few episodes, but it really isn’t that noticeable unless you’re really looking for it, I think. Overall, the background designs of this show is one of my most favorite things about it.

The background music tends to rely on piano, woodwinds (particularly flute), and a few other instruments (like… accordion, I think it is?) to provide the friendly and cheerful nature to back the show. I can’t really say I’ve ever really encountered a slice-of-life with a soundtrack I’ve really wanted to own, and this show isn’t quite that different. The show’s music is nice (if not maybe a bit safe), but it’s not anything worth listening to its own. The show also tends to have its moments where there just isn’t any music at all, and I do appreciate a show that can have these silent moments so that the dialogue and visuals can shine on their own.

The opening theme has this mellow, relaxed feel to it, which of course fits the show very well. The opening animation, while not anything particularly special or all that noteworthy, is also rather nice. I definitely enjoyed the ending theme, Bon Bon, as well, though, but I do have a penchant for the more upbeat-sounding songs like that one. The ending animation was also rather cool, although it also featured a decent amount of still frames. Overall, though, I feel it isn’t that common for me to enjoy not only both opening and ending songs, but also the opening and ending animations for a series. However, Tanaka-kun is one of those exceptions.

The voices of Tanaka and Ohta are pretty much on point. Kensho Ono just sells the part of Tanaka, and Yoshimasa Hosoya’s portrayal of Ohta also works well for his intimidating size but kind nature. In fact, I don’t think I really have all that many complaints, if any, about the voices in this series. If I had to be pushed to say some critique, I’d point to the voices of the two guy-friends-of-Ohta, but we didn’t really get to see enough of them to really know what the characters are like.

Tanaka-kun is Always Listless is a relaxing, sunny anime that’s fun to sit down and enjoy, when you want some time to relax, and get a couple smiles and laughs. The two main characters, and Miyano, are super fun to watch, even when some of the others may not be on that same level of enjoyment. The impressive background designs, and nice opening and ending themes all add up to a pretty nice viewing experience.

As tends to be the case of slice-of-life shows, there’s those that love them, and those that hate them. While this isn’t squarely just playing to the genre it’s in, I don’t feel Tanaka-kun is going to really grab those that generally avoid slice-of-life shows. If you’re okay with something relaxed and simple, without a big drama or plot, you’ll be in for a treat here though.