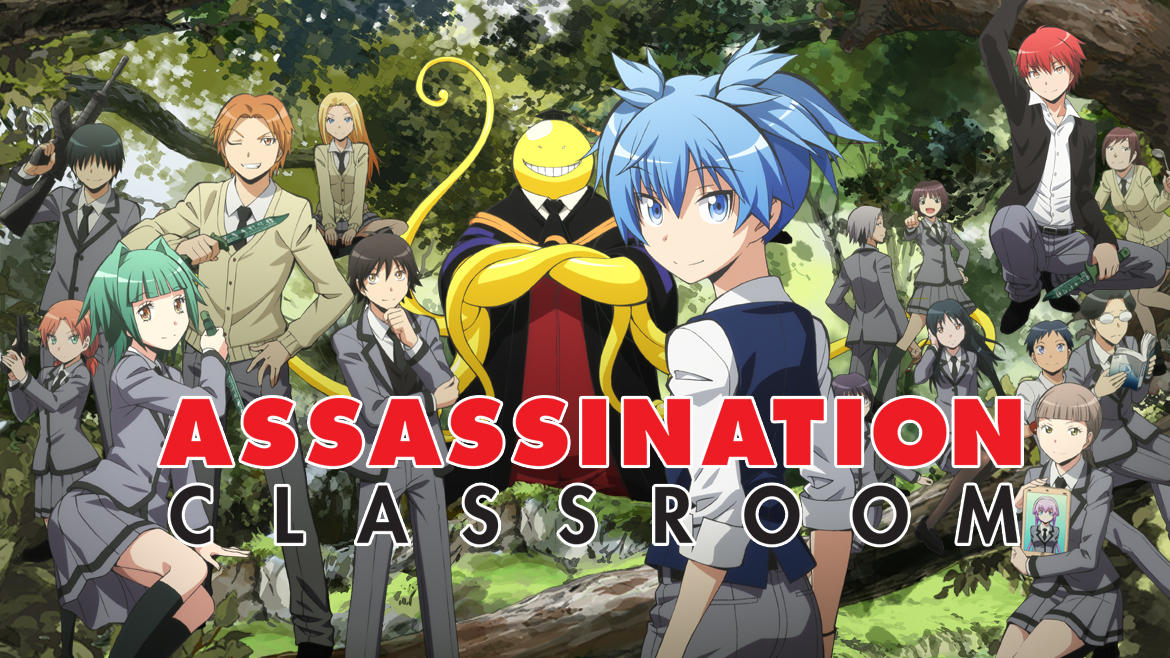 I’ll admit, I’m not usually much of an action-show-type person. Like, I don’t dislike action shows; my first ever anime was Fullmetal Alchemist, and I’d say that’s pretty action-heavy. … But I’ve always been more keen towards drama shows or those that just were more about characters and relationships. Probably doesn’t end up surprising why you see me talking about shows like Nagi no Asukara, Tanaka-kun, or Tatami Galaxy.

So when I first heard of this show, I thought it was just going to be another just plain-Jane action show, and didn’t look more into it from that. As the season went on, and I saw friends (and Funimation’s social media) start talking about it, I turned more towards a “maybe I will give this a try someday, it could be something”. That “someday” ended up coming…

Kunugigaoka Junior High School boasts some of the best students in the entire country of Japan. The four classes of their third level, classes 3-A, B, C, and D, have the best grades and enjoy a top-of-the-line education experience. Their motivation: study the best they can to stay out of the dreaded class 3-E. There is nothing worse than ending up in Class E, the End Class. The E class gets stuck in an old, worn down school building, separated from the rest of the school, with bad, if any, school supplies and no resources to help them. They’re the laughing stocks of the rest of the school, and once you end up in the End Class, there’s no getting out for you.

This year is different though. Because the 3-E class of Kunugigaoka has been given a monumental task: to assassinate their teacher. Just days prior, their teacher had successfully blown a giant hole into the moon, and now he threatens to do the exact same to the Earth. … That is, unless this year’s classmates can kill him.

Thus begins the one school year that could mean the end of the world… or the end of Kunugigaoka’s segregated End Class policy.

The difficulty with a show like this – that focuses on an entire class – is that the show tries to make each student (or, at least most of them) a main character, making it hard to become connected to even any of them, especially since it’s hard to keep a track of who’s who. It’s fairly obvious who the actual main character is here, though: Nagisa Shiota. This blue-haired girl… oh wait, I mean, boy, takes up a decent amount of the screen time and conversation, and even gets to go through the major dramatic ending all by himself (which kind of stinks for the remaining characters, honestly).

The only other kids that I can remember off the top of my head are Karma (Nagisa’s old friend, a delinquent who appears to be care-free), Sugino (a baseball whiz who was kicked out of the sport once he ended up in class E), and Terasaka (some tough guy that only made an impact in the latter half of the series). A lot of the names spouted by the various characters become familiar to me (like Isogai, Takebayashi, and Okajima), but I never really end up being able to match a face to a name. It doesn’t particularly keep me from enjoying the show or the hijinks within, but I’ll really only ever be able to know this show as a hijinks show, as I have no bond with any of the characters.

Beyond them, there are the three teachers: Koro Sensei, the alien(-but-yet-born-on-Earth) main teacher that they are set to kill, although every single attempt to assassinate him never seems to work. Karasama is a higher-up of Japan’s Ministry of Defense, who’s tasked to keep a close eye on Koro Sensei and teach the kids to hone their deadly skills. Finally, Irina is a professional assassin that wound up being the class’s English teacher (with a nickname that probably shouldn’t be repeated here).

The show, being a combination of assassins and middle school, switches between the two topics, depending upon the episode. Some episodes, the two get integrated fairly nicely, and part of me would’ve wished this seamless blending was present throughout the entire series. I don’t exactly see “assassination” and “middle school” as two topics that really blend together well, though, so how this show did it is probably one of the best ways it could’ve been done.

Overall, the weird antics and varied situations make this show stand out as relatively unique, and make it a rather enjoyable and fun experience… although I feel that can be said about most good shows. Even so, there are some aspects that make it more noticeable. The weird design and qualities of Koro Sensei (along with the other eccentric characters that appear later on), the various plans the classmates try to execute to assassinate Koro Sensei – with increasing complexity with each one – it makes for a rather entertaining experience. The entire series went with a pretty consistently good pacing too, not too fast nor too slow.

I’m not at a point where I would say “I wish I saw this when it aired”, but I’m happy with this show and what I got out of it. Although I have my issues with its ridiculously large cast and thus the lack of focus on any one particular character, there was a decent amount to enjoy without needing a connection to any of them. I may get to the second season once I have a chance, but I definitely would like to see more of a focus on less characters.

The animation and character art of this show is above average for a modern show. To be honest, when it comes to shows made in the past few years, the highly improved visual quality of them have really set the bar high as to what I can really consider exemplary. For this show, the movement and action was really fluid, which is definitely important for this show. It also just felt like there was a certain amount of polish or something behind this show too. To be honest, I don’t think I remember a single episode that actually looked bad. All of them were of a pretty good and consistent quality, which can, in some ways, be considered a feat all into itself.

This all being said, the backgrounds seemed to be about the standard quality for anime nowadays. I’m a huge sucker for beautiful background imagery, and this show unfortunately doesn’t provide that… not that every show has to, though. The backgrounds here are certainly good, especially for what this show needs. The bright colors fit for a good majority of this show, although there was a notable switch to darker colors for the more dramatic ending to the series. The final episode, taking place on a helipad, with all the bright lights though… that felt a bit weird. I feel it probably didn’t have to be so over-the-top.

I really liked the background music for this show though. The electronic-style-filled soundtrack sounded really cool, and a part of me always filled with joy once a background music piece started. There is also the usage of more standard instruments for other portions of the show as well, but the electronic music is what stood out the most for me.

I don’t really have an issue with any of the voices used for this show; all of them sounded fitting enough. Of course, it doesn’t exactly help that I haven’t really been able to distinguish the various characters though. I really liked the voice of Koro Sensei though; big applause to Jun Fukuyuma for his performance. I watched the show in Japanese, so I really have no idea how the English dub is. Knowing Funimation though, it’s probably at least passable.

Assassination Classroom was an entertaining experience, that rather nicely straddled the line of “assassination” and “classroom”, although the ending certainly leaned more on the former. Having the entire class act as major characters, though, was somewhat detrimental, as not many of them ended out standing out to me, due to the fact that they tried to put all of them under the limelight. Everything about Koro Sensei, his design, his handling by Jun Fukuyuma, everything, was rather enjoyable though.

I’d say this show is probably pretty agreeable to most crowds, whether you’re more of an action type or a drama type. There is obviously more of a lean towards action, as even the big school tests have them fighting monsters that represent math questions in their mind. I’d say there’s enough in this show to keep most anyone entertained, but you can always see how you feel about it after trying a few episodes. A connection with characters may be hard to accomplish though.

Rating: Good
Recommendation: Watch It
+++ Koro Sensei, entertaining antics with the entire class, electronic background music
— too many characters to really focus on one, Nagisa gets the big dramatic ending all to himself, okay background art

One thought on “Review: Assassination Classroom”